First of all, even though I've spent hours of my life writing about music, I don't particularly like to read music writing. Also 33 1/3 doesn't generally cover albums that I'm cool enough to listen to or know much about. What I was expecting of Dig Me Out, though, was a compelling argument for including the album itself as part of the rock'n'roll canon, an in-depth interpretation of its cultural relevance and insight into the album's content. 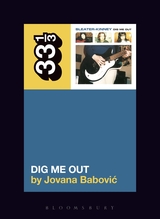 Unfortunately, I think Babovic tried to do too many things at once here. In terms of the album's production or Sleater-Kinney's backstory, there was very little information here that I didn't glean from my Wikipedia research as a high school student, completely electrified by the notion that girls start, sing, and play all the instruments in their very own rock band. Other than providing anecdotes about (male) musicians excitedly posing with the guitar from the album's cover (which belonged to the album's producer), she doesn't make much of a case for why Dig Me Out in particular should be considered Sleater-Kinney's enduring contribution to rock'n'roll. (For my money, Combat Rock would be the album to write about since it cemented the band's reputation as fearless artists to be reckoned with, critical of the Bush administration when few dared to do so.)

This is not entirely Babovic's fault, though. Based on the quotes she pulled from her own interviews with the band, it didn't seem like they gave her much to work with. And that's consistent with what Babovic focused on the most in her book: Sleater-Kinney's relationship with the media. Babovic illustrates Sleater-Kinney's struggle to control their image -- both in terms of the doubters in Olympia who accused them of selling out, and the mainstream media and sound engineers who insisted on questioning their authority as musicians, and attempting to sexualize the band, who, of course, had no interest in complying with such a narrative. Apparently the band has carried those lessons with them to the present day.

I thought this portion of the book was particularly fascinating: we know that mass media is all about creating and maintaining a certain image. We know that bands break up over the ability to have "artistic control" -- i.e., which version of the band gets exposed to the world. Anyone who cares about Sleater-Kinney, anyone who reads this blog, instinctively rejects artists who are too manicured, even though rock'n'roll is all about pretending not to be manicured. I'd love to know how many times I've used the words "authentic," "genuine," or "sincere" on this blog -- but I'd venture it's in the upper hundreds. Sleater-Kinney has that rare quality in spades, of course, but it was interesting to me to see this rarely-documented aspect of the creation of rock'n'roll.

Even then, however, Babovic's analysis mostly relied on critiquing the media's portrayal of the band as they promoted Dig Me Out. She also quoted from a zine Corin produced as a reaction to overly smug sound engineers during their tour. (And while those guys were absolutely sexist, has anyone ever met a tech who isn't smug?) We don't get much from the band themselves or the people who surrounded them. So it's hard to get a sense of what Sleater-Kinney was doing -- instead we just get everyone else's perspective.

Another interesting part of the book was Babovic's discussion of the riot grrl scene Sleater-Kinney emerged from. As a millennial, I was fascinated by the creativity and resourcefulness that young people used to be in touch with each other, and build something together, without the use of the Internet. For me, I've discovered all of my favorite bands on Pandora and by reading blogs. Promoting a band without being able to provide samples of the music seems impossible. However, for folks who were there, I don't think it added much to Girls to the Front's analysis (another book I don't particularly like because I find it to be too impressionistic) of the scene.

Overall, Babovic tried to go in too many directions for such a short book. This is the kind of book you'd give out in a 100-level history class: an overview of many important topics, a gateway to avenues of further study, but it doesn't offer much that's definitive in and of itself. It's probably best for the completist who needs to own everything Sleater-Kinney-related, or for someone who's brand new to the band. But I don't think there'll be much new information for anyone who's spent enough time following the band. There's no arguing, though, that Sleater-Kinney is a once-in-a-generation type of band whose legacy will continue to endure. I plan to give my copy of this book to one of my 10th graders who, like me, found the band not through zines, but through web sites like this one.

Buy Dig Me Out on Amazon.
Posted by Rachel Cholst at 12:00 AM