I'm not going to bury the lead here: this concert changed the way I think about the Indigo Girls.

I've been a casual fan of the duo for a long time. I've listened to Rites of Passage for obvious reasons, but I don't know much of their deeper cuts (after last night, though, I plan to make up for that oversight). My friends teased me about reaching "peak gay," but the truth is that Sleater-Kinney and Sonia Tetlow were more instrumental to my coming out. I like the Indigo Girls because of their incredible skill. And, of course, when you realize you're on the Indigo Girls' press list, you'd be crazy to pass up any opportunity to see them. (I did, however, reach peak gay when the actress who played Max from The L World happened to sit down next to us and then later asked us for directions to the subway. I guess she's one of those people who never leaves Brooklyn.)

Before I get to the show itself, the IGs are pushing their latest album, One Lost Day. This album is fantastic and I would've been perfectly happy if they had simply played the whole thing through. It hits on the Indigo Girls' strongest themes: healing, forgiveness, and, in "The Rise of the Black Messiah," viscerally powerful social critique. The songs tend to be more reflective, as opposed to focusing on the emotions of that particular moment. I find summer to be the best time to step back and take stock, and I foresee that this will be an important album for me in the coming months. 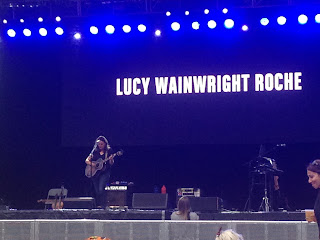 Lucy Wainwright Roche, who has an impressive music pedigree herself, kicked off the show. She's a funny and engaging performer with a lot of chutzpah -- I've found that outdoor concerts are not the best in terms of encouraging audience focus, and to command that attention as a singer-songwriter is impressive. Her music is certainly worth a listen. 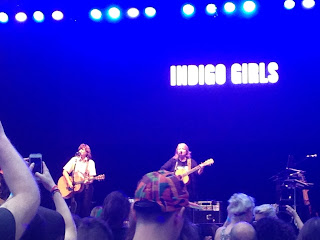 The Indigo Girls themselves, of course, did not have to do much work. Most of the audience knew most of the words -- we probably could've done a two-hour karaoke set. So here's what got me about the show. In the past, I've tended to prefer Amy's songs. I identify with her personally for a number of reasons, and, as this blog shows, my musical taste leans toward the more...aggressive. On the recordings, Amy's songs come through like a suckerpunch. On the other hand, I felt that Emily's songs show in a live setting, which is not what I would expect for quiet songs. I suspect it has to do with Emily's gentle but firm stage presence, which isn't possible to convey through a recording studio mic.

As the Indigo Girls glided through their storied discography, I was struck by the humanity of their songs. Like any music, there's plenty of love and heartbreak and loneliness, but the Indigo Girls have always managed to inject some gentle perspective into what is otherwise an intense soup of emotions: this, too, shall pass. And when it does, you'll live to tell the tale.

Here are the remaining tour dates, in case you're need of some comforting catharsis: