The Flat Five -- In a World of Love and Hope

I'm not even sure where to start with this album. In a World of Love and Hope defies description -- but that's probably to be expected when you have five of Chicago's musical luminaries concocting their mad scientist dreams together. The five-piece consists of Kelly Hogan (who's received some love from here), Nora O’Connor, Scott Ligon, Casey McDonough, and Alex Hall. They began performing together at holiday shows, inspired by Ligon's older brother Chris' oddball songs. As you'll here, though, these songs are all the things you want when a group of people perform music together, and the local heroes have encapsulated their performances for the rest of us. 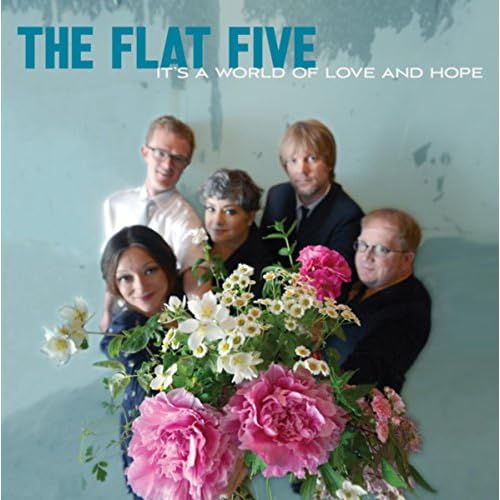 The older Ligon's quirky worldview is certainly felt here. These are smooth, 70s-style pop songs that evoke love, loss, vacations, and kazoos with zeal. (Seriously, though, "Blue Kazoo" has a surprisingly heartfelt kazoo solo.) The end result is that the thoughts of all of us awkward dweebs (unless I'm just speaking for myself) are somehow translated into the effortless cool exuded by the Flat Five. Overall, this album will charm the pants off of you.

The Flat Five -- Official, Facebook, Purchase from Bloodshot Records
Posted by Rachel Cholst at 12:00 AM