I was trying to convince some friends of mine who are decidedly not country fans to come with me to this show. I struggled for words to describe Loveless' sound. Country but...not anymore? Like...music but it has a steel guitar?

I don't think it would have persuaded them to come, but "shoegaze country" seems to fit. Loveless and her band create an immersive wall of sound that only makes Loveless' soaring vocals all the more remarkable. Sturgill might have coined the term psych country, but Loveless was doing it long before him and, like many sisters before her, isn't getting the credit she deserves. 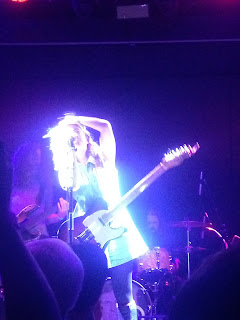 If you haven't been listening to Loveless, you should. Women in alt-country are starting to make a big comeback, and if that trend indeed rings true then Loveless is going to be our outlaw icon. Real is still one of my favorite albums of the year, and seeing the band invest in the music live -- everyone brings a beautiful, physical quality to their performance -- drives home the intensity and true uniqueness of Loveless' sound.

I was leery of making this a "women in rock" post, but unfortunately for me and for Loveless, the audience made it that way. It seems like Loveless had a lot of friends in the audience, but even so she graciously endured more audience requests and shout-outs than opener Aaron Lee Tasjan (also fantastic), who made a name here before shipping down to Nashville. One gentleman in the front continuously called out requests, including songs by other artists. Loveless dryly brushed him off, but when she came out for her encore -- a sublime, heartfelt cover of Justin Bieber's "Sorry" (unlike Justin, she actually meant it) -- she improvised lyrics that completely wrecked that dude. In what universe is it okay to boss someone around while they're doing their job? And why does anyone think it's okay to do that while they're doing their job AND pouring their soul into it?

It's all just a reminder that when we take the stage, when we totally destroy, we're still not seen in the same way as our male (or male-presenting) counterparts. It was a small moment of blowing off steam, and maybe it was a little mean but I don't care -- in that moment, all of the love in my heart went out to her. Lydia Loveless is my new rock'n'roll hero.