I slept on this band and I'm sorry I did. Girls Living Outside of Society's Shit is/was remarkable for sticking to their guns. GLOSS was unapologetically trans*, feminist, and intersectional -- shattering preconceptions of who makes hardcore punk and who listens to it. As a result, the music itself isn't my jam, though lead singer Sadie Switchblade's side project Dyke Drama produced one of my favorite albums.

So why am I featuring an album that I could only get through once? Because it's important. 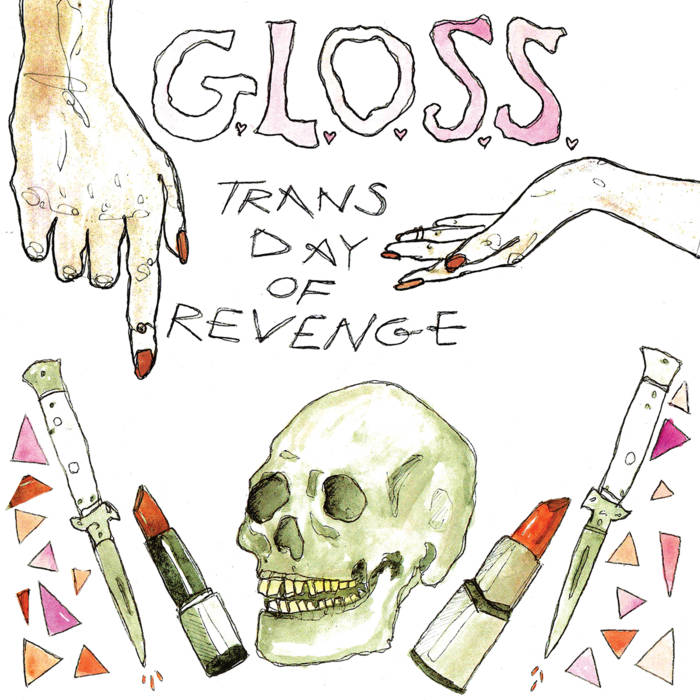 The intolerable treatment trans* people have received in this society is only going to get worse under Trump. Two trans* women that we know of have been killed in the first nine days of the year. Two deaths in just over a week are the reason why Trans* Day of Remembrance exists. This is an international day to honor our fallen trans* and gender-noncomforming siblings, a solemn day that G.L.O.S.S. has nodded to in the EP's title. The killers, until very recently, often go free because police investigations, when they even happen, are not helpful:

WHEN PEACE IS JUST ANOTHER WORD FOR DEATH
IT'S OUR TURN TO GIVE VIOLENCE A CHANCE!
KILLER COPS AREN'T CROOKED
SOLDIERS FOR BASTARDS, THEY DO AS THEY'RE TOLD
THE COURTS AREN'T CORRUPT
MALICIOUS, VIOLENT, THEY MAINTAIN CONTROL
FUCK THE PEACE KEEPING FUCK THE CALM
THE INVESTIGATION IS A FUCKING CON.
THE TRUTH IS KNOWN BENEATH THE GUN
BLACK LIVES DON'T MATTER IN THE EYES OF THE LAW

And there is even less reason to have faith in government institutions after the 20th. But Trans Day of Revenge also empowers its trans* and queer listeners:

For the several times I've been harassed since the election, I've become acutely aware of how misplaced my sense of safety is as I go about my life -- a low-grade dread that stalks people who are not white, male, or masculine-presenting far more often than it does myself. I've given in to moments of despair, but attitudes like GLOSS' -- that it's not enough to simply hold your head high but stay true to yourself and fight back as well -- will give me and others a lifeline (literally) to make it through.

G.L.O.S.S. has put thier money where their mouths are. They famously turned down a generous deal from Epitaph Records because they felt it would interfere with their values. Shortly thereafter, they felt that the pressures of mainstream media attention made the band a stressful rather than healing experience. As a result, the band is calling it a day -- with each other. But keep your eyes and ears out for their future projects.