This is the John Moreland album I've been waiting for.

I still maintain that Everything the Hard Way is my favorite album, possibly ever, but Big Bad Luv is certainly in a close second (at least in terms of his body of work). But since Moreland's hit it big, he seems to have gravitated to his sadder, quieter work. In the Throes is just brutal to listen to. High on Tulsa Heat brought back the full band, but to me the songs still felt a little airy, perhaps a bit stunned that they had gained national attention. Big Bad Luv upends the trend, bringing back the full band (including John Calvin Abney!) and bringing a solid, heartland rock heart to Moreland's unapologetic soul. 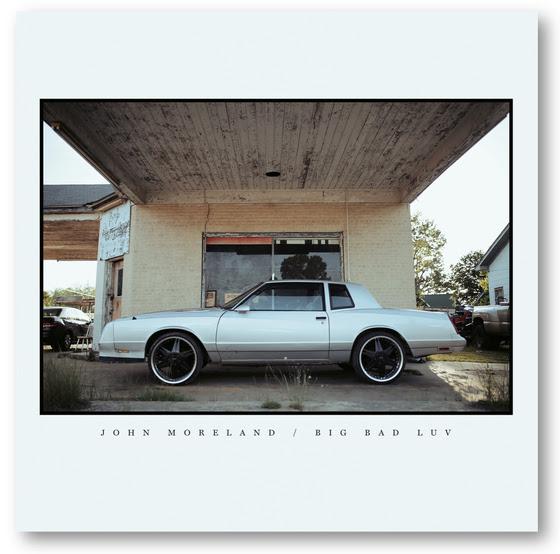 In the same way that "Everything the Hard Way" and "Hounds of Youth" (referenced in Big Bad Luv for those of us who have been playing along all these years) helped me bottle the lightning that was my anger and confusion in my early 20s, "Love Is Not an Answer" holds me while I rock back on my heels in my late 20s. Like Moreland, I find myself looking around as things seem to fall into place. Love isn't the thing that's making it whole, but it certainly doesn't hurt. And there's a power in that realization -- when you go around looking for some avatar of self-love, you're just not going to find it. But when you find a (the?) person who you know is the one to smooth out your edges while you carry them through theirs, it's easy to latch on to Moreland's line:

Before I sound too much like Channi Nicholas, I'll point out Moreland's measured critique of the American Way as an explanation of his maladjustment. We've seen this from Moreland before, but not on his big albums. I'm glad he's ready to turn his sharp eye away from himself -- it was beginning to be cruel to himself -- and to the world around him. We need his voice to help us make sense of it all, inside and out.


John Moreland -- Official, Facebook, Purchase from many places here
Posted by Rachel Cholst at 12:00 AM