I wrote a little about the Jerry Cans a few months ago, and I've been sitting on my hands ever since so I could tell you how excellent Inuusiq is. The album is almost exclusively sung in Inuktitut, the band's native language. Hailing from Nunavut in the Canadian arctic circle, the band masterfully weaves throat singing, country punk, Celtic fiddles, and indie pop into a thrilling ride. It doesn't matter that you might not understand the lyrics: the themes of love, defiance in the face of oppression, and pride of place, shine through brightly. 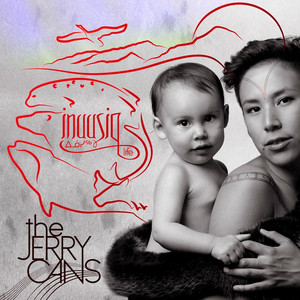 If you're reading this blog, then you get it. You know that music uplifts you, that it helps you find solace, that it helps fuel your defiance in society that wants to hammer you into a good little productive worker while stripping your dignity and security. Interestingly, the only song in English is the last one, about the importance of carrying your home with you wherever you go. The transitions between songs take in audio recordings of Nunavut, grounding a place that is probably distant to most listeners in reality. Here's the thing, though -- indigenous peoples across the world are facing serious threats: destruction of habitat, an uninterrupted five centuries of colonizing governments blithely blowing past treaty obligations, alcoholism, mental illness, police brutality, and epidemic levels of indigenous women "disappearing" with almost no police follow-up.

So I like that the Jerry Cans sang most of these in Inuktitut. These messages aren't for outsiders' consumption: while the emotions are universal, these songs are truly by and for Native people -- they're not for everyone else to take and misinterpret. (And, of course, Inuktitut is beautiful to listen to.) The Jerry Cans are brilliant, no matter what language they sing in.


The Jerry Cans -- Official, Amazon, iTunes, Spotify
Posted by Rachel Cholst at 12:00 AM

Email ThisBlogThis!Share to TwitterShare to FacebookShare to Pinterest
Labels: the basics, The Jerry Cans