Singer-songwriter Kim Ware, the central force behind roving collective The Good Graces gave me some insight into her incredible upcoming album, Set Your Sights. It'll be out on July 7 and you'll hear more from me about it then! For now, see what Kim has to say.

1. It seems like the Good Graces is a mostly rotating cast of characters. How did that help your recording process and did that also hinder it in any way?


I think it helped because it made things a little more open to possibilities. Nothing was ever set in stone when we started (and some things weren't until the 11th hour), as far as instrumentation or who would do what. That made it fun to construct (and then sometimes de- and re-construct) the songs. It all felt really organic, like the songs evolved as they were supposed to. That said, it did mean recording took a lot longer than I think it could have, and it can be a little stressful for me - as I tend to like to overplan - to work in a way that's less structured.

2. You've described Set Your Sights as your "midlife crisis" album. Was there any event in particular that sparked this theme for you?


I wouldn’t say there was an event in particular. I think for me it’s mostly about my age and things I’m experiencing or reflecting on, and how I’m processing all of it. I’ll be 45 in a couple of weeks. I think for women (or at least for me, and well, probably men too), when we hit 40 or so we start to take stock and question where we are, if we’re spending our time on the things we want to be, etc. I’ve been doing a lot of that and I think that might have come out in some of the songs. But also, and this might sound cheesy, but I kinda feel like I lost and then found myself through making this album. We spent 4 seasons on it. So it’s like that thing about relationships, it’s important to spend 4 seasons with a person to know if they are right for you? I agree. And in 4 seasons, you go through a lot. I did a lot of processing while making this album. It’s basically a record of that. 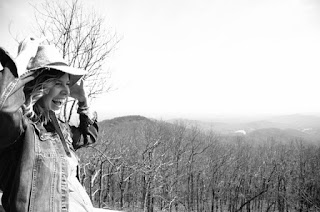 3. The songs here are pretty bleak (but in the best kind of way, of course) -- would you say you're a glass half-full person who uses your music to process the low times, or are you a glass half-empty person and this is just the way life is?


I’m definitely a glass half-full person. I’m a really happy person who happens to write a lot of sad songs. I once took a personality test that concluded that I’m “drawn to sad things”. I always have been - be it songs, movies, stories, etc. The sad stuff just speaks to me, I think maybe because it often comes across as a little more honest and real. And I think happy or sad, it’s just all part of the same equation. The yin and the yang. You have to have the bad to appreciate the good, and part of my dealing with the bad is attempting to turn it into art, I guess. I think there's something important about acknowledging challenging times and confusing feelings and at least trying to put them into words. Maybe it's part of my nature to try to deconstruct things and figure them out. Writing the songs does help me sort through it.

4. In "Too Old For This" you sing that you're "much too young to regret things I've missed." At what age do you think it's appropriate to start, because I know I'm full of 'em already. And when you get to feeling like this, what do you do to pull yourself away from these thoughts?


That’s an interesting question! For me, I’m far more likely to regret something I did than not ever do it in the first place. I think that’s part of what I’m trying to say there. When it comes to major life changes or big experiences, I like to think I take calculated risks. I’m not to a point yet where I’m looking back and thinking “I wish I would have …”; and I can't imagine I'll have a lot of those — if I think about doing something for long enough I’m pretty stubborn and I figure out a way to at least attempt it. I do have some things I’d like to do before I’m on my death bed (mainly places I’d like to travel to). If I never get to, I guess that will be a bummer, but I’ll bet it won’t be because I didn’t try. It’ll be because of some sort of outside circumstance. And I’m ok with that. If I do get to feeling regret about something I’ve done or didn’t do, I guess I write a song about it! But I think as part of my whole glass-half-full thing, I try to think of it as something I needed to go through in order to grow.

If you're in the Atlanta area, you can catch the Good Graces' album release show at Avondale Towne Cinema this Saturday at 8 PM!

Want to hear Kim's favorite songs about regret? Become a Patreon member at $5+ a month for her top 10 and other great goodies!
Posted by Rachel Cholst at 12:16 PM

Email ThisBlogThis!Share to TwitterShare to FacebookShare to Pinterest
Labels: interview, The Good Graces