It's not every day that a live show can bring you to tears but this wasn't an ordinary live show. Will Johnson and John Moreland (supported by John Calvin Abney) stormed the Bowery Ballroom with nothing but their guitars and a keyboard and brought the 500-person venue to a complete standstill. (Perhaps it should be labeled the "Two Johns and a Son" tour?)

Johnson kicked things off with himself and a steel-string acoustic guitar, taking one pause to tell an anecdote of an awkward fan. I'm not super familiar with his catalog, but most of the songs in the set were from his beautiful new album Hatteras Night, A Good Luck Charm (see previous link.) The album was complex both lyrically and musically, a truly enveloping studio experience. So it was mesmerizing to see these songs stripped to their bones, just one man and the uncanny reverb of strings and wood. Johnson also used his vibrato to great effect, filling the entire space with an unearthly voice with no assistance from the microphone. 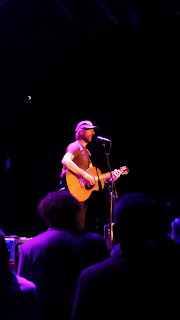 Moreland and Abney were, well, perfect. Even though I've been following him since Everything the Hard Way, it was my first time seeing Moreland live. Moreland is generally all-business, with few breaks between songs. The pair started the set off with the two opening tracks of Big Bad Luv before winding back to High on Tulsa Heat and In the Throes. Moreland's set told the story of a man reckoning with his 20s, but ended on a high note with "Amen, So Be It" -- letting go of the vagaries of life and pushing ahead to claim what's yours. 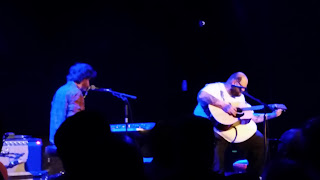 Abney was a treat to have around. A skillful guitarist and songwriter in his own right (see previous link), Abney added life to the songs with tasteful guitar licks, harmonica riffs, and keyboards. And he had the sweetest smile the entire time -- both my girlfriend and I are a little in love with him right now, which is confusing. He won over the New York audience, launching into virtuostic solos while the crowd cheered him on. It was a perfect night for some of the best music there is, and if you're lucky enough to live in the places below you should buy your tickets as soon as possible.