A student just walked into my office and remarked that I'm always listened to the same song. I laughed and observed that yes, I listen to a lot of music that basically sounds exactly the same. But Nathan Bell stands out in so many ways. Sure, he's a guy with a guitar and a gravelly voice but he wields the guitar with the same passions Woody did: listening to these songs, you can believe that this machine kills fascists. 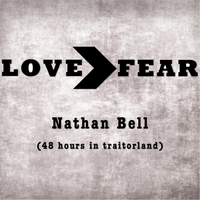 Bell's been writing and singing protest songs since the Vietnam War. This album is a revistation to some of those songs, as well as some new ones inspired by recent events. As 2017 continues to spiral into a hellish parody of our worst fears, Bell's album stands as a reminder to empathize with everyone -- everyone -- even when they might not seem worth it at first. Given the increasing number of arguments I've had with randos on Facebook, it's a good lesson to take to heart. (I will not, however, stand for anyone trying to denigrate any aspects of my humanity. They're not up for debate.) While Bell introduces us to a truly dizzying array of characters, the two that stand out to me are Jeb in the song's lead-off track "Big Old American Dream," who robs a bank to pay his medical bills but instantly regrets it. Conversely, Emma in "So Damn Pretty" stands out for her ubiquity:

Bell's performance on the album is similarly stellar: recorded live in-studio with a small audience (though you can't hear them in the recording), Bell achieves a rare intimacy with his listeners. LOVE > FEAR  is a necessary album.