Karen and the Sorrows -- The Narrow Place

I've been shouting praise for Karen and the Sorrows from the rooftops for a good five years now. I've heard the band tweak this collection of songs over the last three years or so. And now that The Narrow Place is finally here (or at least, finally here for you to listen to), I'm a bit at a loss for words. I think the press can speak for itself though; almost every damn song on this album has premiered somewhere and I can tell you that that is highly unusual. People who are paid to be experts in this know that Karen and the Sorrows are something special, so it's about time you figured that out if you haven't. Also, if you haven't read Monday's interview with Karen yet, check that out to get some further insight on the album. 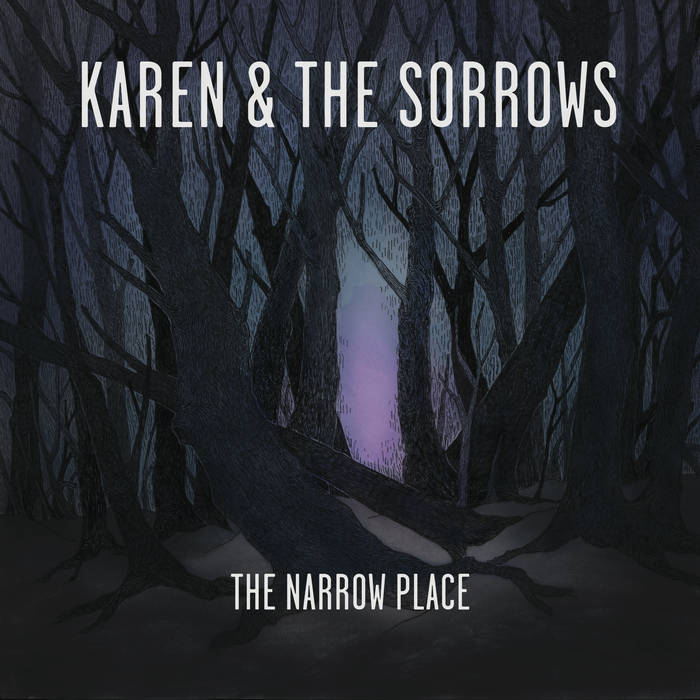 As for the album itself, The Narrow Place is a rare feat: it captures a complex, three-dimensional snapshot of Karen at a specific moment in time. While the songs explore the heartbreak from the end of her long-term relationship, the album also sees Karen navigate her Jewishness, white privilege, queer pride, and activism. Ultimately, the album weaves these themes together as if to say, once and for all, that the personal is political.

As I wrote over on No Depression, "Can't Miss What You Never Had" is, on the surface, a breakup song that rues the self-deception necessary to keep a failing relationship alive. However, I also see it as an ambivalent farewell to the patriarchal heterosexual family expected of most of us. As I see my straight friends settle down and head inexorably towards marriage (I'm in my laaaaaaaaaaaaaaate twenties) I'm just not there, and neither are most queer people my age. And while I wish things were as clear-cut for me -- the "pixie dust" offered that I have happily declined -- it's just a path I and my pals need to forge for ourselves:

To me, the most remarkable of the songs is "The Price of the Ticket." Named for a James Baldwin essay about what white people have to lose from racism, the song examines the erasure of Jewish identity in favor of an "American" one. A student of modern American cities knows that the relationship between Jewish people and people of color is strained at best. Karen interrogates her and her family's complicity in that struggle:

When the band started playing these songs a couple of years ago, it was a response to the police killings of Trayvon Martin, Michael Brown, and Eric Garner -- a list that rapidly expanded as mainstream media began to cover such crimes and frustration boiled over into national action. It felt important for us Brooklyn hipsters (a majority of whom belong to overlapping activist organizations) to hear these realities in song, but also novel, as not too many songwriters in the Americana world were openly interrogating their white privilege. Unfortunately, these songs have aged well. The Narrow Place, named for the Jewish people's search for the Promised Land and now a metaphor for searching for liberation, is an album that provides a path forward for us all.

Want to hear the song Karen and I wrote together? Of course you do! Subscribe to my Patreon today! If that's too much commitment for you, please consider dropping a tip in my Ko-fi cup (no account required!)
Posted by Rachel Cholst at 12:01 PM

Email ThisBlogThis!Share to TwitterShare to FacebookShare to Pinterest
Labels: cheap music, Karen and the Sorrows, the basics