Hello, friend. Do you miss 90s alt-rock? Do you wish it had a liberal undercurrent of Eastern philosophy?

If you also wish it was delivered with an Australian accent then, friend, do I have excellent news for you.

According to Wikipedia, Nivikalpa refers to the state in which there is no alternative reality to the one in which you are connected to everything. Disconnected Genius' album presents a bit more ambiguity than a full-throated endorsement to that sense of selflessness. Indeed, the album itself is an exploration of nihilism (the lead-off track, "About Nothing," asks "What do you do when you don't give  a fuck?") 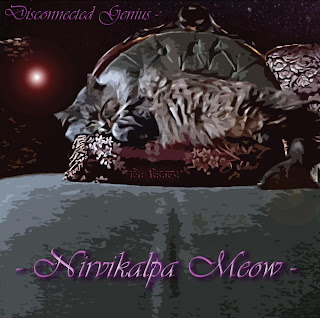 Sonically, Nirvikalpa Meow sound like if the Red Hot Chili Peppers slowed down and took a page from Nirvana's book. The songs shoot for complexity but stay grounded enough to be approachable. That's good news, because songwriter Jamie O'Keefe is certainly bold in the range and extent of the topics he's interested in writing songs about. Ultimately, Nirvikalpa Meow is the kind of album that will make ya think but also rock out pretty hard.

Thanks for reading! Help me help you find great music by subscribing to my Patreon and dropping a tip in my Ko-fi cup!