Sara Rachele consistently knocks it out of the park, so it wouldn't be that interesting for me to say that this album is amazing. Rachele is an artist who always pushes her boundaries and exceeds herself with every subsequent release. What I will say, though, is that April Fool, which is out tomorrow, is an out-of-the-park grand slam with two outs in the ninth. Also, I highly recommend you listen to it with headphones. A good engineer doesn't want the production values to be a distraction, of course, but the production on April Fool is noticeable: intimate and organic. You're not just in the room with the band; you're enveloped in their music. 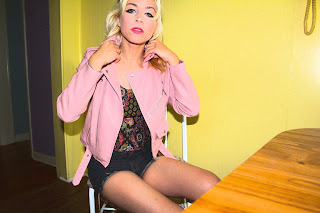 "Cosmic country" has been thrown a lot, especially since Sturgill's last record. I find it to be synonymous with the term "graphic novel" -- a spurious distinction between a popular (and populist) genre and something with more "serious" artistic merit. In this case, though, Rachele exemplifies what it can truly mean: songs that rely on the earthiness of folk songwriting while gently collapsing sonic boundaries. Rachele proves throughout the album that she can comfortably inhabit multiple spaces. The campfire-style "Keep on the Sunnyside of Life" juxtaposed with what I believe is the album's standout, "When It Rains in Paris," a spacious ode to loneliness, proves Rachele's versatility as a singer and mastery of songwriting. April Fool is a sure shot for my "Best Of" list in a few weeks.

Help me help you find great music! Subscribe to my Patreon or make a one-time contribution to my Ko-fi today!

(NB: This post originally appeared on No Depression.)
Posted by Rachel Cholst at 12:00 AM