Roxie Watson has been near and dear to my heart for quite some time. The four-piece amiably dips into bluegrass, country, rock-a-billy, and folk with equal measure, and on their fourth release Try A Little Kindness, they throw in a generous helping of humor. While the band divvies up vocal and songwriting duties, Lenny Lasater's cigarette-infused alto takes the fore on this outing, giving the album a pleasant down-home folksiness. 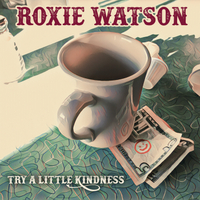 In a year where everyone's trying to establish their political street cred, Try A Little Kindness takes a different tack. After all, the band has had plenty to say in the past about homophobia and the exploitation of working-class people. The album title itself, is of course, a reminder of how things should be. "Simple American Life," which will be featured on the kick-off of Adobe & Teardrop's podcast and premieres tomorrow (!), is a gentle but forceful reminder that queer partners tend to want the same things as everyone else: respect, stability, and security. But "Sure As" reminds us, with tongue in cheek, that "progress" isn't necessarily progress at all:

Another holiday, another new year's eve
Lots of good intentions
Bad habits need to leave
I know we're getting older
And thicker through the belt
But I don't think I'll ever like
My bread being made from spelt!

The band members have played together in various configurations for decades, and Roxie Watson has never sounded tighter. Try A Little Kindness showcases inventive storytelling that reminds us that real Americans have common sense, dignity, and compassion for others.

Thanks for reading! You can support the blog and podcast by subscribing to our Patreon or dropping a one-time tip in our Ko-fi cup! Stop by tomorrow for the full podcast!
Posted by Rachel Cholst at 12:00 AM