Gibson might be on the verge of bankruptcy, but there's a certain type of music that never goes out of style. It's that person with an electric guitar, their pals,and some sad songs that shake off tragedy. Pedigo's Magic Pilsner is one of those timeless albums. Named after John Pedigo's late father's infamously bad homebrew, the album is a collection of music to honor his father. Like all the best folk rock, the songs suggest there's a light at the end of the tunnel, but they don't necessarily tell you how to get there. If you love the Gin Blossoms' sense of atmosphere and the Gaslight Anthem's raw emotion, Pedigo's Magic Pilsner goes down real smooth. 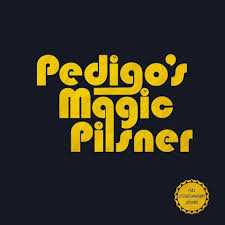 Essentially, this is the music this blog is all about. A collection of erstwhile underdogs stumbling along their path. Pedigo himself notes that the guiding force behind this album is his wife's motto: every year gets better. It's a thoughtful album that has a lot of heart. It gets loud and it'll bring you to a place of contemplation -- something we could all use a little more of. Pedigo's Magic Pilsner is a fine collection of well-crafted stories told in three verses and sing-along hooks. You don't have to be alone when the going gets heavy, and it doesn't have to stay heavy either.

Pedigo's Magic Pilsner will be featured on Thursday's episode of the Adobe & Teardrops podcast! Can't wait to hear it? Subscribe to our Patreon today! You can also drop us a one-time tip on Ko-fi!
Posted by Rachel Cholst at 10:30 AM