Ben Fisher -- Does the Land Remember Me?

I had just met this woman and I was terrified that I was going to offend her. We were at a neighborhood meetup in Washington Heights, a neighborhood in Northern Manhattan that has a long-standing Jewish community. She's about thirty years older than me. She mentioned that she was involved with a local temple. I told her I was interested in finding a place I could go to near where I lived. She asked me about my practices.

"Well, I don't read Hebrew. My family is pretty much a High Holy Days/Passover type."

"Ah. So you're a secular Jew. What are you looking for in a congregation?"

I was suddenly gripped by gut-churning anxiety. Should I tell the truth? What if I offend her? But shouldn't I worship with a community that shares my values? I took a deep breath.

"It's important to me to belong to a congregation that unequivocally supports the rights of Palestinian people."

The title of Ben Fisher's new album is not a rhetorical question. Does the Land Remember Me? is the existential question of anyone who is raised Jewish. A central tenet of the religion, after all, is that we are the chosen people of a promised land. Conservative billionaire Sheldon Adelstein foots the bill for a program that allows young Jewish people to travel to Israel free of charge to better understand their heritage. But is it truly possible to have a connection to a place that, statistically, your ancestors did not live in for generations upon generations? Especially if the country you grew up in feels most like home? 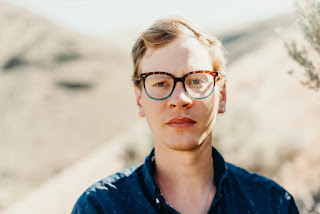 Musically, Fisher's album is fairly minimal -- it's mostly his voice with some piano accompaniment, though a few songs have larger backing bands. With no disrespect to the musicians on the album, the music is not the main event here. Damian Jurado, who produced the album, lets the lyrics take center stage. Instead, Fisher focuses on the 60-odd year history of a country that asserts its legitimacy on the basis of ancient history. Fisher is no stranger to the region, having lived there as a journalist, seeking to tell the stories of Israelis and Palestinians alike. Does the Land Remember Me? is an extension of that work.

Fisher's telling of Israel's story is wide-ranging: he describes the initial distribution of land among Jewish settlers in Tel Aviv in 1906; the viewpoints of both Jewish and Palestinian children; the confusion of a bomber in the Israeli Defense Force; the blithe optimism of a Jewish settler crossing into what's now the Gaza Strip.

That's a song that's worthy of some attention, especially on this site. "Yallah to Abdullah" opens with some gentle slide guitar and a verse about a train. Textbook country music. By using country tropes in the song, Fisher also calls attention to a particularly American trope: the Wild West. Without saying as much, Fisher draws parallels between the colonizing mission of the United States and its systematic attempts to exterminate indigenous peoples (in other words, manifest destiny) and that of Israel's possession of the Gaza Strip. The character in the song dismisses any objections to the nation-building project:

Maybe one of you is a Jeremiah
You can weep as you walk further East...
So Yallah to Abdullah
And he'll welcome you with open arms..
We're trying to build a nation
And we don't have time for bleeding hearts

This is about as direct as Fisher gets as to where he stands. He wants us to see the nuance in one of the most complex diplomatic entanglements of the postwar era. On "Why We Build The Wall," Fisher lists the justifications for Israel's blockade of the Gaza Strip. To me, this doesn't sound like satire, but it's clearly not Fisher's own stance: Fisher doesn't want to blame or satirize or point fingers. Instead, he wants to make these viewpoints understandable.
Jewish people mine and Fisher's age -- millenials, essentially -- are among the first generation of Jewish people in thousands of years for whom Israel is not an abstract concept. By the time I came of age, Israel was a thriving nation, not the struggling quixotic project as my parents and grandparents knew it. And it has a powerful military -- thanks in part to the American taxpayer.

Whatever occurred in the past, I grew up with an Israel that prevented food and medical supplies from entering Gaza -- and all but prohibited people from leaving. I saw an Israel that fired rockets into civilians and chalked the casualties up to the fog of war. I saw an Israel that had created a literal apartheid state, forcing Palestinians to carry special identification just to enter Israel. Just this summer, Israeli soldiers systematically fired upon -- and killed -- unarmed protestors. Last week, the Prime Minister of Israel, known for his hawkish policies, issued this truly terrifying Tweet, suggestive of a certain round of ethnic cleansing that lead to Israel's creation in the first place.

Most importantly, though, I came of age in the aftermath of September 11th. The first Bar Mitzvah I attended for a classmate was in December 2001; it was initially scheduled for October. Imagine Bat and Bar Mitzvah season in New York City in the 2001 - 2002 school year. My entire social calendar in seventh and eighth grade was taken up with Hebrew school and other people's celebrations. Rabbis knew this was the most that young people would likely go to schul and were excited to try to bring in new congregants. For almost two years straight, I listened to rabbis attempt to link the September 11th attacks to Israel's need to defend itself with disproportionate force. Their passion burned as brightly as their arguments were faulty. If being a good Jew meant pledging allegiance to Israel, as the rabbis claimed, I was out. I'm far from the only one who feels that way.

Thanks to people like Fisher, who are challenging American Jews' relationship with Israel, I'm trying to figure out how to get back in.
Does the Land Remember Me? deftly grapples with this contradiction. Fisher distills grand geopolitical decisions into individual narratives. In a climate where asking that a religious congregation recognize a people's fundamental human rights is controversial, this is a first step towards opening real dialogue.

Ultimately, Fisher answers his question with another one: does it even matter? The human desires we project onto the land and the transgressions we commit surely are not a part of God's plan. In the album's title track, Fisher illustrates that the land itself is not the point:
It's not a right
It's that I will return
If not my body
Then my memory will burn
Friday night candles
In all of their homes

Instead, it's tradition and family that are at the core of Judaism. It's what's bound us together for centuries -- no matter where our feet touch the Earth. Does the Land Remember Me? seeks to heal some of the wounds of our pasts so we can begin to look towards the future.

Today is an important release day for an album like this: it's the Sabbath before Rosh Hoshanah, the beginning of the Jewish new year. As our year 5778 rolls into 5779, it's a time to imagine the radical possibilities of the new year: of a world more just and more in line with God's vision, a world where the nation state of Israel lives up to the utopian Israel of the Jewish imagination.

A condensed version of this review appears on Wide Open Country
Posted by Rachel Cholst at 12:00 AM

Email ThisBlogThis!Share to TwitterShare to FacebookShare to Pinterest
Labels: Ben Fisher, the basics