Becky Warren seems to be building a career on stories nobody else wants to tell. Her debut album, 2016’s War Surplus, was a devastating album about the romance -- from courtship to dissolution -- of an Iraq war veteran and his girlfriend. The album was based in part on Warren’s own experience as she and her partnered struggled to maintain their relationship in the face of his PTSD. War Surplus (one of my Top 10 of 2016) didn’t dwell on the usual tropes, giving dignity to all of the people involved in the story. The songs had a rock’n’roll edge but tended to be more somber, giving way to Warren’s diamond-sharp singing. 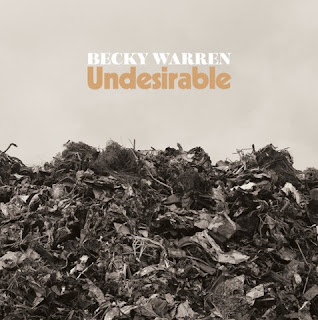 On this outing, Warren is focusing on the lives of the “motel homeless” -- people who are able to make enough money to live in hotels but cannot otherwise provide for their basic needs. Undesirable draws from Warren’s relationships with the residents of the Drake Motel in Nashville. They are a collective of people who sell a newspaper, The Contributor, which is self-published with the aid of a local non-profit. The newspaper is intended to generate income for its vendors and writers while educating the general public about their lives. Each song on Undesirable draws from Warren’s conversations with many of these vendors, but you’ll see that homelessness and poverty are not the main focus of these songs: instead, Warren shows that we all have more in common than we think, as long as we can fully appreciate each other’s humanity.


While that may sound sentimental, don’t be fooled -- Undesirable is much more hard-hitting musically than War Surplus, as we can see in the lead-off single “We’re All We’ve Got,” which features the Indigo Girls’ Amy Ray. Warren’s got a gift for getting at the tough stuff and creating music that’s a call to action -- not with grand pronouncements, but by reminding us of the nitty-gritty details of life we all confront. "Valentine," one of my other favorites on the album, is just beautiful stuff from start to finish: the kind of character study and symbolism that will turn seasoned songwriters green with envy.

Thanks for reading! Help Von and Rachel share great artists like Becky Warren with the rest of the world by dropping a tip on our Ko-fi cup or subscribing to our Patreon! Subscribe to the Adobe & Teardrops podcast to listen to more of Becky's music as well as lots of other Americana and roots artists!

Email ThisBlogThis!Share to TwitterShare to FacebookShare to Pinterest
Labels: Becky Warren, the basics