I'll admit that I was a bit thrown off by Laura Jane Grace's new album, Bought to Rot. Since it was put out by Bloodshot Records -- an alt-country and Chicago institution -- I was hoping that this album would be Grace's pivot to Americana. (Which would also cement my working theory about queers and Americana -- ie, that we're drawn to it like moths to a flame.) It wasn't a vain hope; that's the trajectory of many of Bloodshot's artists, including label-mate Cory Branan, whose album Grace appeared on. 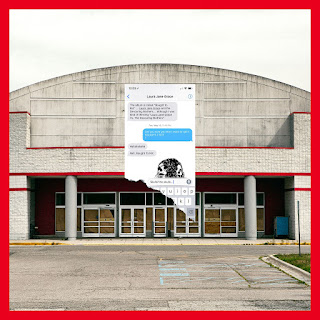 I've given the album a number of listens now and I'm still trying to tease it apart. That's not a complaint -- instead I think it's a testament to Grace's talents as both a songwriter and producer. (Whether or not you care about Laura Jane Grace or Against Me!, you probably care about music and this article where Grace ranks her own albums is fascinating.) Sonically, the albums feels very similar to Against Me!'s previous album, Shape Shift With Me. I was particularly disenchanted with one of the songs on the album, so I didn't write about it here. However, the music on both albums have a more aggressive thrust and muddier over-all vibe than the strong pop structures and trans power anthems of Transgender Dysphoria Blues. And that makes sense, too, considering the production hell that album was caught up in.

I think what makes Bought to Rot challenging is that each song stands alone. The opening, "China Beach," hearkens back to older Against Me! songs, while "Born In Black" has an exaggerated, epic sensibility that calls to mind 80s cock rock. I certainly empathize with "I Hate Chicago," where I was essentially assaulted by a cis white gay man in the heart of Chicago's gayborhood. These songs capture a sense of unmooring -- living in a new town (Chicago), recently divorced, and navigating dating, we're seeing Grace continue to figure herself out. The album isn't without humor -- "The Friendship Song" and "The Acid Test Song" gleefully recount misadventures with a charming snarl. "Apocalypse Now (& Later)" pretty much says what we're all thinking. And, of course, "Reality Bites" is the energizing empowerment I was hoping to get a good dose of given everything that's been going on.

For me, the album has a much stronger finish as Grace slows things down. "Dreamy Screamy" begins as a lullaby and -- well, it says it in the song. We also see Grace explore a new direction -- in the last few songs she warms to an agile 70s-style art rock that reminds me a bit of Lou Reed, but with Grace's piercing arrangements. Overall, the album feels like a mixtape, but it also feels honest: it's a snapshot of a life in transition.

Laura Jane Grace & The Devouring Mothers -- Purchase from Bloodshot Records
Posted by Rachel Cholst at 11:14 AM