Brooklyn's Hawk & Dove are tackling a huge topic with their next album, Our Childhood Heroes. The album tracks Elijah Miller's father's cure for a rare disease. "Smoke & Lungs" is an expansive song that ties the forthcoming album's major themes together. While the song mourns the ephemeral nature of life, it's carried by a sense of triumph, as if calling the end upon us. 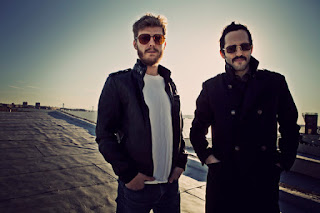 Miller writes, "Half of this album is about my father's search for a miracle cure to address the early-onset Parkinson's disease that was killing him, and half of the album is about our generational search for greater luxury and ease at the direct expense of other people's lives. This is one of the two songs on the record that probably straddles both themes equally. An exuberant and exciting search for life on the backdrop of an imminent death, and similarly the consumption and adventurous way of living in capitalism all while leaving a scorched earth behind. 'Smoke and Lungs' is one of thirteen songs about loss on this record, and I think the lyrics are less metaphorical than they might seem -- but no one's heard it yet so I'm not actually sure how it seems!"

Our Childhood Heroes is out on January 19th.

Thanks for reading! Rachel wrote a comic! Check it out here! Send us music via SubmitHub. Send us money via Ko-fi or Patreon. Contact Von via linktr.ee/vonreviews and say hi to Rachel on Twitter @adobeteardrops
Posted by Rachel Cholst at 12:38 PM

Email ThisBlogThis!Share to TwitterShare to FacebookShare to Pinterest
Labels: Hawk and Dove, premieres