"Growing up as a 'passing' Mexican-American taught me that being a working class Mexican was not cool, at least to upper class suburban white kids," Alicia Blue writes. "My friends made that apparent with comments like 'do you have an alarm on your house?' Or 'ew, the gardeners' when I’d be outside at their houses playing. I don’t care what ethnicity I was born into, I had a deep seated knowing of what a hero was. And that was somebody doing a job nobody wanted to do. Work in 90° weather that’s backbreaking? Not for me. So my heart palpitated for people like that, and they happened to come from the same place my ancestors came from. I couldn’t understand why nobody else could recognize that." 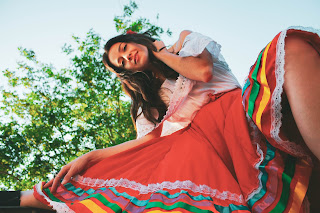 Blue's debut single, "Icognito," dives headfirst into the thorny -- and hypocritcal -- mess of white identity in America. Blue details an unfortunately long list of micro-aggressions she's experienced when people around her assume she is white -- and the even worse things they say when they learn her Mexican heritage. In a piece on the song shortened here for clarity, Blue described white boys growing up who lost interest in her when they learned of her background, casting directors' thoughtless racism -- and the catharsis of writing "Icognito." "This song is the release of it all. The anger. And now, freedom."

As discussions about gender equity in country music seem to be making glacial progress, it's past time to expand this discussion to people of color and queer people in the music industry. "Incognito" has a heavy blues swagger, but it also veers into the kind of anti-folk talk-singing reminiscent of Ani DiFranco that gives the song some extra heft. "Incognito" premiered on KCRW yesterday and I hope this leads to bigger platforms for Alicia Blue to share hers -- and all too many other peoples' -- stories.

Rachel wrote a comic! Check it out here! Send us music via SubmitHub. Send us money via Ko-fi or Patreon. Contact Von via linktr.ee/vonreviews and say hi to Rachel on Twitter
Posted by Rachel Cholst at 10:06 AM