It's been a minute since we've heard from Meg Olsen, whose EP Deal From the Bottom seriously impressed me back in 2013. Unfortunately, I missed out on her 2014 debut album Charade, but not worry -- Olsen's got some more magic in the works and we're going to hear some of it today. Olsen's now balancing her sophomore album with another laborious creative work: her 1-year-old.

"Capture the Moon" is not much like anything you've heard before. It pulls in a lot of influence from songs you have heard before -- somewhere between Carole King, Patti Smith, country, 80s hair band guitar theatrics, and Virginia Woolf. Clocking in at 5 minutes, I wish it was even longer. 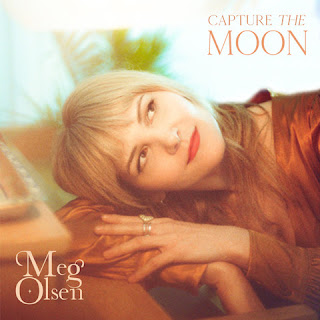 Here's what Olsen has to say about the song:

" The song deals with the creative female spirit wrestling the idea that you can 'have it all' versus the ingrained societal myths that once a woman is over 25 or is less angsty or wants a family or has some success - that the art somehow might suffer for it. I think it is worth noting that I was newly pregnant when I wrote the song and dizzy with questions about the future! While the song is very vaguely auto-biographically inspired I know or have read about so many women who have struggled with this idea: worrying about what will happen to your passion, art or career if you reach for other things as well.

Also, worth noting, because this song was so shaped by the experience of being a woman it was important that I collaborate with women on it in some way - I’m happy to say that the photos, artwork and graphic design were all intentionally done with women artists."

Meg Olsen -- Official, Purchase
Posted by Rachel Cholst at 10:05 AM