Andrew Adkins has firmly established his bona fides. You probably know him from the Appalachian stompgrass band The Wild Rumpus. They blazed trails across the US, including notable stops at  Merlefest, Bristol Rhythm & Roots, and the Americana Music Association. Adkins' fourth solo album, Who I Am (out March 15th on Mountain Soul Records) finds him at a contemplative stage -- searching for home and sorting through the whirlwind of the past seven years.

The album features an all-star lineup of West Virginia musicians, Chris Stockwell (dobro), Johnny Staats (mandolin), Ammed Solomon (drums), Clint Lewis (bass), Bud Carroll, Ron Sowell (guitar), as well as Mira Stanley, Chuck Costa, Cara May Gorman, Stephen Struss (of The Sea The Sea) and Annie Neeley on harmonies and background vocals. Adkins may spend a good portion of his time on the road, but Who I Am is as much a testament to community as anything else the album represents. 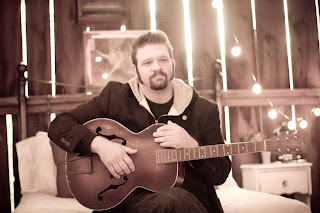 Adkins recently earned himself a spot on Mountain Stage, thanks in part to Sowell. “I have been going to and listening to Mountain Stage my entire life. It has helped mold and shape my taste in music and nurtured my West Virginia pride. I was beaming standing on that stage, hoping to make my friends and family feel that same pride. It was profoundly amazing.”

“Written while on tour with The Wild Rumpus, we had spent several days in Brooklyn, and, like so many West Virginians who leave chasing work, I yearned to return home. I was ready to be back in my West Virginia hills.”

Adkins brings his well-worn voice to this world-weary rocker. What strikes me about the song is Adkins' warmth: his affection for West Virginia is abundantly clear -- even as Adkins seems wistful for the road. It's a complicated duality that Adkins captures with skill and grace.