PREMIERE: The Buffalo Wabs and the Price Hustle -- "Oh, Ramona!"

Cincinnati-based Buffalo Wabs and the Price Hustle have a rock-solid commitment to bridging America's past and future. (FYI -- "Wabs' means "mobs.") On their third album, Stranger in the Alps (out March 15th), the Hustle have put forth a seamless blend of Americana classics and their own originals.

“This album explores the first co-writing the band has undertaken,” says dummer/vocalist and band spokesman Casey Campbell. “And through that collaborative process we’re beginning to find more complex voices, more adventurous tunes that bridge our influences even more than before.” 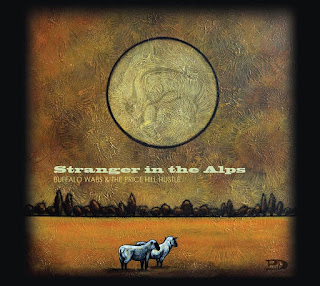 The new original material featured on Stranger in the Alps is “a cross-section of stylistic influences and voices,” says Campbell. “Oh, Ramona!,” written by Campbell, hearkens to the Piedmont Blues-era musicians, with tongue-in-cheek lyrics and a wry humor throughout. “Those old pickers knew how to tell a story; that’s the kind of vibe we’re after.”

"Ramona" is a foot-stomper to be sure. It tells the age-old story of a woman who's just about had it with her partner -- who realizes just how helpless he is without her. The Hustle give the song a jaunty air, suggesting that perhaps the narrator isn't in such dire straits. You'll hear a few of the Hustle's other songs on today's episode of Adobe & Teardrops. Rifling through the album, you'll hear that the Hustle can play it cool just as easily as they can tug at your heartstrings. “We play music that we connect to, whether it’s an old find or a new line," says Campbell. "We want it to mean something, every time.”

The Buffalo Wabs and the Price Hustle -- Official, Facebook
Posted by Rachel Cholst at 10:00 AM

Email ThisBlogThis!Share to TwitterShare to FacebookShare to Pinterest
Labels: premieres, The Buffalo Wabs and the Price Hustle