Despite their brotherhood, Aaron and Phil Reed didn’t start playing music together until five years ago when Phil left their hometown of St. Charles, MO to join Aaron in -- where else? -- the Pacific Northwest. Though the brothers have since developed their own brand of finger-picking folk, the pair have racked up hours of experience in bands that ranged from heavy metal to reggae and rock, to punk, country, and funk. 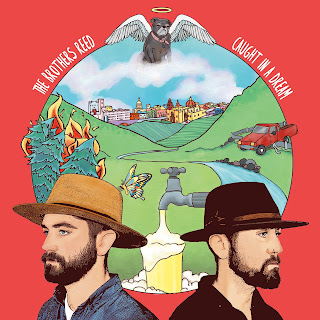 That musical voraciousness is clearly an asset to the brothers' songwriting.  With their fourth record Caught in a Dream, The Reed Brothers are pushing their limits even further. When I first heard the gently lilting "Irish Hymn," I thought it must be a traditional song. It has a timeless quality that will haunt you long after the last string is plucked.

The Brothers Reed -- Official, Facebook
Posted by Rachel Cholst at 11:23 AM