What do you get when you combine steel guitar and meditations on death and reincarnation? Why, Thin Lear's "Death In a Field" of course. It's an incredible character study and seemingly light interpretation on one of the most terrifying -- or joyful -- experiences in life. Thin Lear was generous enough to answer some questions about the song.

Your music is really eclectic! Where does that inspiration come from?

Thanks! I try to follow the lead of each song, and not think too much about genre during writing or recording. So much of my recording process is trial and error, building tracks up just to strip them down again. I think I have to go overboard with instrumentation to know where the line is. When the arrangement itself starts overtaking the song, it’s time to chill out.

But then when I strip things back down, the arrangements often have elements that are kind of intriguing combinations, like, with “Death in a Field,” the core instruments ended up being pedal steel, with synth and twinkling piano, in a kind of ethereal mix. And it just felt right, but I never would’ve started with that instrumentation. I had to find my way there. 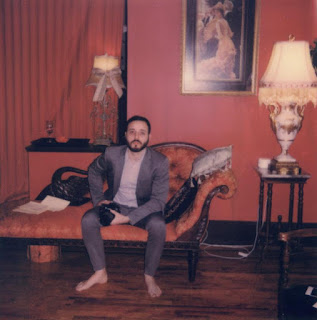 Could you tell us a little more about "Death In a Field?"

Initially, I just had the opening line of the song: “I’ll survive as a child/All hungry and wild/Life overwhelming is life at the start.” I just really liked the concept of someone nearing the end of their life, and thinking about being reborn, being a baby again, and looking forward to the tremendousness of experiencing life for the first time. Someone at the end of existence feeling the tug of something new, and terrifying, and potentially beautiful. And then the choruses came out of that. Waking in the morning, or “drowning in an evening of lovely black sky,” indicate a kind of serenity in being swallowed up by eternity, and finding some sort of comfort in that.

When I started writing the song, I had recently watched someone I love pass away in a brief, but organic way, and there were moments in their process of dying that seemed to bring revelations to them. The character in the song is of my own invention though. This character isn’t perfect, and is well aware of that, and is simply being honest about what they’ll miss the most, and what they’re looking forward to. And it isn’t always flattering, but it’s true to the character.

What do you hope listeners will take from your music?

This might sound incredibly pretentious, but I hope it connects them to a feeling or a memory of something sad or wonderful from years ago, maybe something they haven’t thought about in a while…a person or a moment. Songs I love really do that for me. Sometimes it’s hard for me to know how I’m actually feeling, so music allows me to dig past any confusion, and really uncover pieces of who I am and what brings me emotion. So, yeah, I hope the song opens a heavy door in someone’s mind.

But, short of that, if it just makes people hum, I’d be completely happy with that as well. I’m not picky.