Flying First Class is Pete Mancini's hardcore album. That's not a comment on the music; I've gotten to know Pete and he's a pretty even-keeled guy. Stylistically, Flying First Class doesn't diverge much from his past work under his own name and with his former band Butcher's Blind. Pete excels at that Gins Blossoms-esque high lonesome melancholy -- especially when his songs sit at the corner between Americana and blues. In fact, Flying First Class is a bit peppier than Pete's previous work, thanks to some hints of playful '60s pop peppered throughout the album. 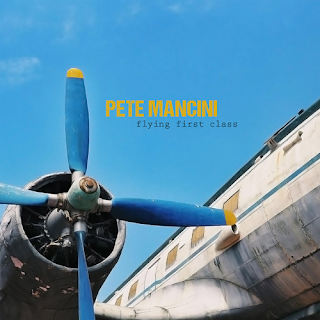 So what makes First Class pack such a punch? Pete's songs are usually sad but they've rarely been angry. But that's what we get here. Though the album opener, "Pine Box Derby," sets a wistful tone, it also calls attention to the many obstacles people our age face in a Sisyphean struggle towards financial disability. "My Hometown," as previously discussed, jumps headfirst into political commentary, with the album's title track rounding out the theme. Even "Cease and Desist," (which you may have heard last week) a song about the comic travails of the music industry, has an extra bite to it. After all, when promises turn sour, what's your recourse?

Pete has an answer, capping this collection of frustrated songs with "The Day I Stopped Running." It's a beautiful examination of what happens when you open yourself to the people around you. And that kind of sincerity is as punk as it gets.