Even New York City can be a small town. Last week, while standing desolately outside my dentist's office with Novocaine contorting my lips and two ice packs clutched to my cheeks, a former coworker happened to walk by. Neither of us lives or works in that neighborhood.

In the queer community, that network is even smaller. When LA-based Angeles County reached out to me about their debut EP Raised Clean, it turned out we knew had a number of queer country family in common. "Grapevine" gets into that -- not the happy parts; more like the awkward parts. 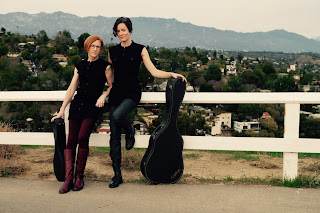 "Grapevine" is practically redolent with the fury of a lover scorned. Meehan Rasch's evocative, arrow-to-the-heart lyrics and Lauren Steely's dusty, driving arrangements give "Grapevine" a pulsing energy. The groove will remind you of "These Boots Were Made For Walkin'" -- the singer has their shitty ex in their sights, and revenge is eminent.

Lauren is a versatile multi-instrumentalist and composer known, among other things, for her legendary right hand technique. Meehan's luminous songwriting and wistful vocals were highlighted most recently on her ethereal solo pop EP, The Angeles Project, and she can be found at gigs across LA supporting her many local musical family members, including Evan Rasch (Runnner, Harvey Trisdale, Twang Clark), Dan Rasch (Runnner, Bioquery), and Jason Cirimele (The Donkeys, The Blank Tapes, Dust Collector)

Meehan and Lauren began collaborating in 2018, and wrote and recorded the songs on their debut EP "Raised Clean" in less than three weeks.

Angeles County -- Official, Facebook
Posted by Rachel Cholst at 9:49 AM