As a dedicated Redwall fan, I'll admit that when I saw Brian Jacques' name in my Inbox I felt a mixture of confusion, delight, horror, and irrational hope. This here is a different Brian Jacques, though. Jacques is a New Jersey native who has followed many of his peers and heroes (Gaslight Anthem's influence can be heard here) to the big city. 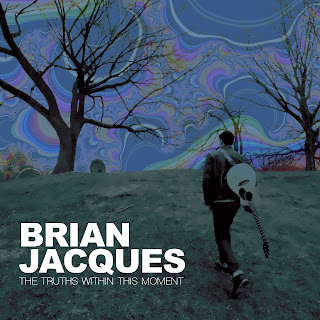 On "20/20," Jacques slows things down for a melancholy meditation on what happens when you take things a little too fast without taking quite enough care -- and then facing up to that. Fans of Pete Mancini will find lots to love in Jacques' album The Truths Within This Moment. Jacques creates an atmosphere of romantic detachment with just enough punk rock bite to remind you that he means business.

Jacques writes, "On the surface, it's a first-person telling about the struggle to move out from a nowhere town, but then come to appreciate the unappreciated, painfully, during the process of severing themselves from their roots.  Below that facade is a simple, austere exploration of the relativity of truth and the how a shift in angle can completely alter the way you look at something that seemed so certain."

Brian Jacques -- Official, Facebook
Posted by Rachel Cholst at 11:19 AM