Seasoned string band Chain Station knows how to party and is greating the spring with the release of Backroads (out May 3rd.) Backroads is an album of original bluegrass songs inspired by the highways, landscapes and residents of the band's Colorado home.

"We met around a campfire," explains co-founder Alex Thoele, "and we've been putting that loose, organic vibe onstage ever since. We call it mountain music, because that's where we formed. That's where we live. And that's what we do." 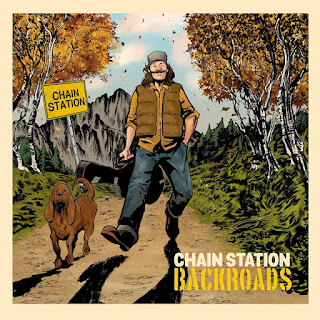 Like its name suggests, Backroads could serve as an appropriate soundtrack for a road trip. "When we were recording," Thoele remembers, "we were thinking, is this something we'd want to drive through a mountain pass while listening to? So many of our fans listen to our albums while driving, so we kept that in mind and it influenced our creative process."

String music isn't really my thing but I was immediately pulled in by Chain Station's chemistry. "Half Full" is an optimistic tune that keeps us down to earth with an appealing gruffness. The band brings a punk energy to some useful reminders for those of us who maybe spend a little too much time running around and should be spending a little more time enjoying the ride. As bassist Jon Pickett writes, “This song is a celebration, so raise your glasses and...keep your glass half full! The second verse speaks to the fact that pouring your heart out doing what you love sometimes leaves you feeling empty. But friends and family and those certain moments in life give you that recharge you’re needing. I feel like that’s what this song and this album are doing for me as a musician.”