Over the past few months, I've been struck by Grover Anderson's creativity. Between the blog and the podcast, I've introduced you to a few of his songs -- and none of them sound the same. Anderson's interested in telling the best stories he can with all of the tools at his disposal, and he's got a great many: whether it's exciting horn arrangements or gorgeous strings, the constant in Anderson's music is his warmth. 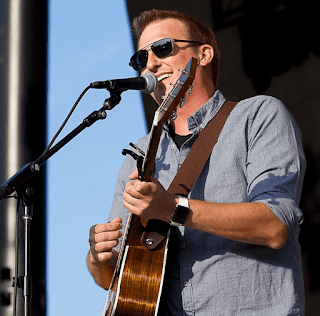 On "Evergreen," Anderson finds home in the Gold Rush Hills he calls home -- and the person whom he's built that home with. Anderson sells the tender love song with the strength of his performance; this isn't the kind of love that's passive. On "Evergreen," Anderson is making more than a promise -- he's renewing his steadfast commitment to the people and the places who are committed to him.

"As cheesy as it kind of sounds, the whole album is about reconciling pursuing music while still choosing to live in a rural area. I love big cities (just got back from going to San Francisco for a concert yesterday), but I love even more waking up and looking at the forest out my back window," writes Anderson. "Asking people to pay attention to our little corner of the world, especially when one could argue that rural life is disproportionately represented already, is a lot. But writing and playing and all that comes with it is so vital to who I am as a person that I, quite foolishly, am out here trying to have it both ways.

So to tie all that back to Evergreen…the song is about finding home and appreciating it. It comes out of the looking back at past mistakes of "The Good" and the anxious self-doubt of "Standing Water," then seeing someone who lacks that home and security in "Parallel" and knowing wholly that the journey you've been has been the right one all along (despite the struggles that I reflect on later in "The Archives".)

Then again, being comfortable is a massive privilege, and I try (and probably fail) to come to grips with that in On Comfort. But "Wasps" & "Frontman" are a recognition of "Here I am, I'm not done, but I'm extremely fortunate and eager to see what comes next."

"Evergreen" is the second single off Anderson's new album, The Frontman, which is out today.