It's not often that an artists takes 46 years between albums -- let alone tours extensively to support it. But when Lavender Country, the first known recorded queer country band, was rediscovered in 2014 by Paradise of Bachelors records, it was clear that Patrick Haggerty's jaunty and raucously radical anthems were just as necessary as they were in 1973. Patrick, well into his 70s, has been hitting the pavement since Lavender Country's re-issue and, at long last, is preparing to release his next album. 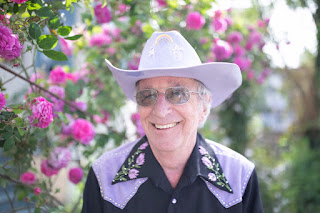 I've had the pleasure of getting to know Patrick and it's my honor to be one of the first to introduce you to the new album, Blackberry Rose. While the album is host to a cast of queer country's promising new talents, Blackberry Rose feels true to Haggerty's debut album. It's got the same wit and homegrown quality -- though this time with better sound.

I've been reading Martin Duberman's essays from the 80s, About Time, about queer life and establishing the discipline of queer history. He describes the then-too-common stereotype of miserable queers, a stereotype that decontextualized why queer people at the time struggled (and continue to struggle) to maintain their mental health. "Gay Bar Blues" would seem to hearken back to a bygone decade, but I'd argue that our interior lives are still catching up with our external rights -- for however long those last. The multi-layered harmonies make the song feel off-the-cuff, one of Lavender Country's greatest strengths. Patrick is great at lulling you into a false sense of security before you realize how deadly serious he actually is.

Unfortunately, records aren't free and we need to get this out in the world! Be a part of the history and future of country music and donate to the GoFundMe for Blackberry Rose today!

Lavender Country -- Official, Facebook
Posted by Rachel Cholst at 11:00 AM