When you've got Radney Foster behind the wheel -- or, in this case, tiller -- you know you're in good hands. Foster is producing Alisa McCance's debut album, Crossing Rivers, and you can catch the title track right here. 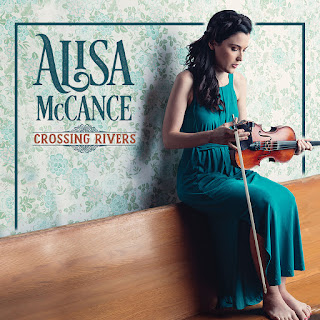 Though this is McCance's debut album, she's been hitting the boards with some of country and bluegrass's greatest, including Luke Bryan, Alison Krauss, Josh Turner, Ken Johnson, Gary Nichols and Radney Foster at both the Grand Ole Opry and Ryman Auditorium. She's also opened for Lady Antebellum, Little Big Town, Clay Walker, Asleep at the Wheel, Nitty Gritty Dirt Band and was the featured violinist in Keith Urban’s tour video.

“Having worked with Radney on the stage, it is such an honor to now work him in the studio and hear my songs come to life,” says Alisa. “He is someone I’ve admired for years. Radney produced the album I’ve always dreamed of creating. It all magically came together.”

"Crossing Rivers" is a bold debut, demonstrating McCance's command of metaphor. Wrapping Biblical and Mark Twain references together, McCance shows a knack for understanding how to pull the currents (pun intended) of American cultures together into a winsome country song. "Crossing Rivers" shows McCance's 90s country influences, but the lyrical clarity places McCance in 2019. It's a song of resilience with lush production, but also a sense of immediacy that makes the song relatable.

The single is the title track for McCance's new album. You can listen to "Crossing Rivers" on all digital services now!

Alisa McCance -- Official, Facebook
Posted by Rachel Cholst at 10:43 AM