Based in Austin, Texas, Russel Taine Jr. is not one man. Rather, it's a four-piece comprised of Aaron Winston (vocals/guitar), Justin Winslow (bass), Cory Fica (drums) and Brittany Long (keys). Skillfully blending indie rock, punk, and folk, "Year And a Moon" finds the band in a wistful frame of mind.

The group officially formed in March 2017 after a last-minute request to play at Austin’s famous venue The Mohawk. After spending 2017-2018 playing shows around Austin, Russel Taine Jr. put together their inaugural EP, American Dream. A second EP, Tales, is in progress. 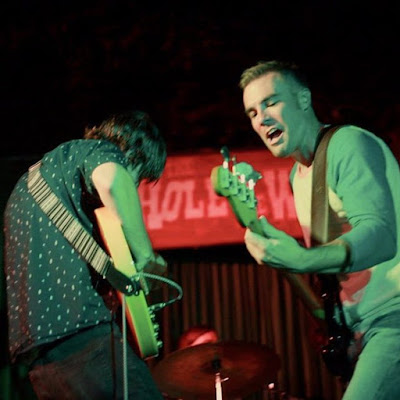 A ramble on that murky line between nostalgia and regret, "A Year And a Moon" channels millennial pop-punk through Uncle Tupelo. Even as the  the dream-like momentum of the song's rhythm mirrors the narrator's life passing by, the subtle twang gives the narrator an edge. He's resisting -- or, at least, he thinks he is.

"Written about the long car ride from Cleveland, OH to NYC, this song is an homage to restless nights and meandering desires," Winston explains. "The big ideas in this song are imagining what could have been — and thinking about what is and what was. The initial thrum of an electric guitar through a reverse and tape pedal is designed to help snap the present into focus and the past into a contrasting relief."