Some Highlights From the Brandi Carlile Concert

I went to the Brandi Carlile show last night and all I got were some wonderful memories and a few videos! After uploading this beast, though, it seems like I'm rate-limited or something because Twitter won't let me post any more.

It's Mavis Staples and Brandi Carlile singing the Pops Staple duet, "Friendship," together.


We were in the 2nd to last row so these are GRAINY!

Mavis's opening set was wonderful. We missed the first song or two, unfortunately, so we could beat the line and throw our money at both of the incredible powerhouses who sold out Madison Square Garden last night. It seemed like Staples focused her set on her most recent album, We Get By. That's a bit of a shame, because literally none of the people sitting around us knew who she was and sniggered their way through her entire set. If she had closed with some of the Staples Singers classics it probably would've shut their stupid faces.

I was so haunted by this I had an anxiety dream about going to a Mavis Staples museum and not knowing if anyone else was really appreciating the significance -- especially since it was on a maple sugar farm in New Hampshire. (????) Is that a metaphor for popular American music? Maybe!

My sister and I first saw her live playing the Gentilly stage at Jazz Fest, a side-stage for the most-respected local New Orleans acts and up-and-coming national acts. We got to watch her standing alongside Paul Sanchez (who wrote the lyric this blog is named for) and we were all amazed. I got to see her again  last summer popping into basically everyone's set at Newport Folk Fest. But when the house lights shone on last-night's sold-out crowd throughout the night, I kept gasping in awe.

Carlile cried her way through singing "The Story," and I did, too. This honor couldn't have been bestowed on a more deserving person. I believe everyone I write about on here should be playing to a crowd of 14,000 people. I'm so happy I got to witness that dream come true for one of them.

For me, the highlight of the night was Carlile bringing on Amanda Shires and Natalie Hemby to play through a few Highwomen songs: "The Highwomen," "Redesigning Women," and "IF She Ever Leaves Me." (Maren Morris was playing LA last night.) Both Carlile and I were pleasantly surprised to see that most of the crowd already knew the words!

Truly, the apex of the whole evening was Mavis singing Yola's "Freedom Riders" verse on the Highwomen. I almost lost it. You all know what the rest of the song sounds like; here's Mavis singing her verse (and my sister and I freaking out.) 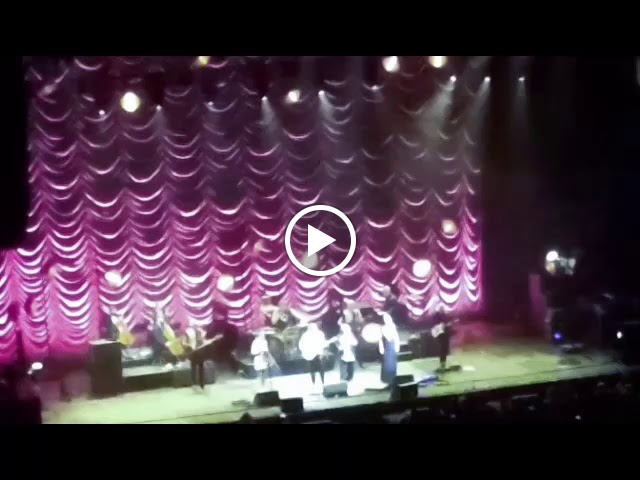 As a personal highlight, Carlile acknowledged that "If She Ever Leaves Me" is one of the first queer country songs. (Seemed kinda pointed but okay.) She shared an op-ed about the album from The Boot on her Instagram stories, so there's a small chance she read my article on queer country history, since it's linked there. I'm sure that acknowledgement comes from a bunch of personal conversations with her community (and mentors, as I discussed on the podcast.) But I'm going to pretend I moved the needle a tiny bit here. For what it's worth, I wore my Lavender Country t-shirt to the show.


I think it's fairer to say that I'm more of a fan of her in general than her music. In general, when she's at her best, her songs are head and shoulders above everyone else: she deserved to win that Grammy. But a lot of her back catalog is just fine, and that showed when she played the deeper cuts at last night's show. However, the concert reminded me about what Brandi Carlile has meant to be since she popped up on my Pandora feed almost 15 years ago: that even I, a newly out, scared college freshman could have a voice in popular music. Even in country music. That one day I'll get married and have kids, something that seemed in doubt back then. And that, thanks to the labor and sacrifices, of countless activists, a lesbian can play country music to a sold-out crowd to the biggest stage in the world in the heart of New York City.