Jeff Glatz's debut solo LP, Disappear, has a little something for everyone. If, like me, you yearn for a '90s jangle-rock college radio filter over your Americana music, then Disappear was tailor-made for you. Glatz's road-worn voice roots these atmospheric songs down into the blue highways of an old interstate map. His sincerity calls to mind Bill Mallonee and the Vigilantes of Love. Of course, when you look at his collaborators, that roots rock-meets-Replacements vibe makes a whole lot of sense.

"I really got to take my time on this album, to let the songs evolve into what I wanted," Glatz told Adobe & Teardrops. "I know it’s technically a solo project, but it was such a collaborative effort. I had the help of some really strong musicians and artists, and ended up with something that makes me pretty proud." 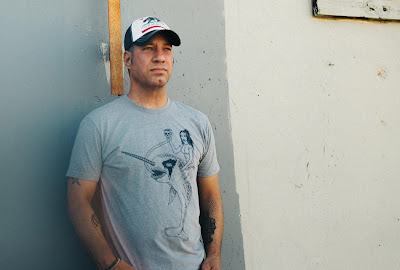 Glatz gained national recognition with his brother Don in the Pittsburgh-based, indie rock band Peacefield. They scored regional success with two LPs and a full schedule of live shows, which led to tours with The Goo-Goo Dolls and 10,000 Maniacs, as well as song placement in film and TV. In 2006, the brothers moved to the Texas Hill Country, and gained a loyal following playing venues in San Antonio, Austin and surrounding towns.

In 2009, Glatz took a break from touring and hosted living room concerts for the likes of Will Johnson (Centromatic, Monsters of Folk), Sarah Jaffe, David Bazan and Tommy Stinson (The Replacements). This inspired him to turn to solo efforts, culminating in 2016's four-song EP Multiverse. This year, Glatz again teamed up with Duane Lundy to give Disappear the same dream atmosphere.

Disappear includes six original tracks by Glatz and a joy-filled cover of Mason Jennings' "Between the Lines." At heart, Disappear is an album of love songs. "Singing these songs feels like I’m telling truth without a filter, even when it’s not necessarily my truth," Glatz muses. "Either way, it was very therapeutic to make, and I'm excited for people to hear it."

Jeff Glatz -- Official, Facebook
Posted by Rachel Cholst at 10:11 AM