HEY! LISTEN: Hannah Connolly -- "From Where You Are" and "House/Home"

What is it that makes some singers stand out from the rest? For me, it's that chemistry of a compelling voice, lyrics that dig deep, and sincerity. Based on Hannah Connolly's first two singles, that chemistry is going to lead to a stunning first album. 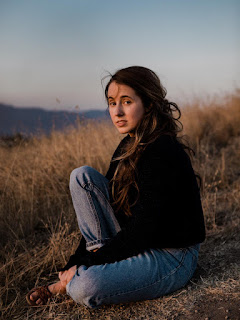 Since I've been remiss in my blogging on here, today's a double-header with "From Where You Are" as the lead-off single. (Released some time ago, but better late than never!) The song recounts the harrowing experience of Connolly losing her brother, Cullen.

"This was one of the first songs written for the album and it speaks to how I felt in the days and months after losing Cullen," she writes. "In the midst of shock and disbelief, life felt like a strange dream. The whole world was turned upside down and none of it made sense. One of the most vivid memories I have from that time was standing in the desert and looking up at the stars."

On "House/Home," Connolly confronts a major transition with grace. "This song is about the feeling of losing home, and how home can be anywhere with the people you love, but it can also feel like nowhere will ever be home again when they are gone," she writes.