Come for the banjo, stay for the attitude. That's the ethos behind Denver-based Whitacre's "mountain rock." It's a fitting title for this hard-driving music -- think Tyler Childers with more craft beer and less cocaine. The three-piece, made up of Paul Whitacre on lead vocals and rhythm guitar; Chase Perry on banjo; and Mark Cunningham on drums, released a five-song EP, Within The Mountains’ Shadows in 2018.

With a half-million streams on Spotify, sold-out shows with Mt. Joy, Wild Child and Birdtalker and 100+ other performances under their belt, Whitacre is one of Denver’s fastest rising rock bands. They've toured with with Family and Friends, Wilderado and Wild Rivers, which led to a performance at Red Rocks Amphitheater. The band's new album, Seasons, was produced by Joe Richmond (Tennis, Churchill) and mixed by Yuuki Matthews (The Shins) and will be released in the spring of 2020. 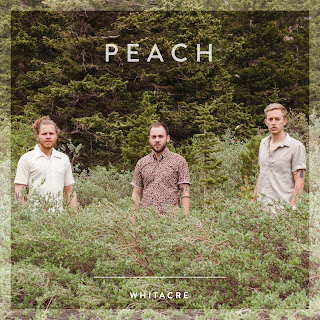 “Peach,” the first song off the band's new album Seasons, is a love song. It’s about the ups and downs of a relationship, and the promise of holding on no matter what. “Prodigal” brings it all full-circle, as a conclusion to the running away, and a return to home, and what is right and true.

Whitacre formed after Paul borrowed a tuner from Chase Perry backstage -- a fateful decision that ultimately lead to a band with a mission: “We have a burning desire to tell a story that isn’t often told in the music industry today,” Perry says. “One of redemption and restoration.”

“So many people are hurting these days and it’s all just barely under the surface,” he continues. “We want to go there. We want to reassure the broken-hearted that there is hope, we want to show the invisible that we see them and that they matter. That it’s okay to be hurting. We believe that doesn’t only happen in lyrics but in a melody as well. We believe in the power of music and that it is used to soften and heal hearts.” ​

That sensitivity is evident on "Peach." While the song has a distinctively aggressive approach, the lyrics suggest something more vulnerable. As the trio delivers pitch-perfect harmonies, it becomes apparent that this isn't just a couple of dudes getting their aggression out. More importantly, it's not a song that frames love as an act of dependency or heroism. Instead, "Peach" expresses a deep appreciation for the narrator's partner. It's an important reframing of a dynamic that is often repeated over and over again in Americana (and everywhere else.)

Seasons will be released in Spring 2020.

Whitacre - Official, Facebook
Posted by Rachel Cholst at 10:21 AM