Lavender Country -- Blackberry Rose and Other Songs and Sorrows

Suffice to say, a lot has changed since 1973, especially within the realm of the queer liberation movement. A couple of weeks ago, I attended the Brooklyn Museum's exhibition celebrating Stonewall's 50th anniversary with my college's queer alumni group. Most of the people in the group were older men (my college went co-ed in 1985) who had survived the AIDS crisis.

The exhibit featured younger artists -- people my age or only a bit older, who were born after that fateful protest. I didn't really get the implications of what that meant when I attended the exhibit in June. The art -- well, a lot of it was moving. Most of it was just fine. It's messy, it investigates queer history, it reclaims the place of trans POC in the eyes of white, cis queer people. 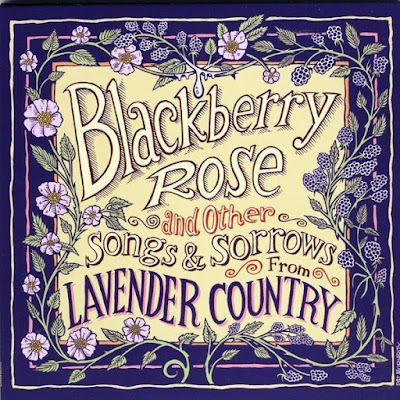 I expressed this to a fellow alumni, who graduated from our alma mater shortly before I was born. He gently disagreed with me, describing the art as "exuberant." He arrived in New York just before the Plague Years. A decade of grief and sorrow that defined queer people was simply not a part of my chronology. By the time I came of age, HIV wasn't a death sentence; by the time I became sexually active, PReP was available to those with insurance, making HIV virtually untransmissible.

It's not that I don't respect the enormity of the AIDs crisis. I can't talk about it aloud without getting choked up. But I began to understand myself as a queer person in a time and place when that shadow was receding, when my understanding of historical inheritance as a queer person not only included AIDs and Matthew Shepherd but also Stonewall.

But it also meant I and my cis-male friends especially grew up with few role models to transmit this history with us. Few people to guide us through queer coming-of-age dilemmas. Few people to show us that there was a future for us, whether or not we wanted a traditionally white picket fence and 2.5 kids or not.

There's a gap in the American queer family a generation wide.

They say that it takes a lifetime to write your first album and a year to follow it up. In Haggerty's case, he chose a lifetime to follow up Lavender Country. Blackberry Rose, more than anything else, works hard to bridge that generational gap.

Musically, Blackberry Rose doesn't miss a beat with its predecessor. If you're a fan of jangly, heart-on-its-sleeve country music that has no qualms about sucker-punching you, Blackberry Heart is now your favorite album of 2019. Most of the songs were written around the same time as the first album, so they retain that sense of raw-ness that a lot of 70s political music had: these weren't meant to be eternal ballads necessarily -- they were meant to be rallying cries to fit a specific moment. There's no time to be precious about composition. After two decades of hipster irony and disassociation, a lot of Blackberry Rose can feel unbearably on the nose. Patrick recorded liner notes that help contextualize the song; on Spotify they're listed as a second disc -- I'm not sure how they're sequenced if you were to purchase the album.

In keeping with country music's storytelling tradition, Haggerty constructs characters and stories outside of his own experience. The title track is a protest against racism. Other songs rail against sexism -- another celebrates Communist heroes of the McCarthy years. While there are plenty of songs about the struggles of the queer experience -- particularly in the years before and during the AIDS crisis -- Haggerty's song curation illustrates the layers of oppression we all need to fight against together specifically because they share the same source.

What makes Blackberry Rose so vital -- perhaps more so than the music -- is the careful work around the album. Haggerty assembled an Avengers-like band of Lavender Country's original members and folks who are starting to make their name heard, including James Wilson of Paisley Fields. The band on the album is both cross-generational, cross-gender, and multi-racial, the kind of Lavender Country community described in the title track of the first album. Haggerty even bows out of vocal duties on some of the songs, literally providing younger voices a platform by de-centering himself.

More than in my lifetime, we need courageous role models to show us how to collaborate and thrive in desperate times. There's a whole lot of talk out there about allyship and working across generations. Patrick Haggerty is one example -- one of the very few -- of how to walk that line.