These are scary times and in scary times it's always good to hear from an old friend. Kory Quinn's special brand of bare-boned blues is the perfect soundtrack for trying times. Quinn likes to turn to old-time sounds to lay bare the harsh realities of the modern age -- and to show us that we haven't come so far after all.

The recordings were done by Mike Coykendall (M Ward, She & Him) and Jon Neufeld (Black Prairie, Jackstraw, Delorean, & Kung Pow Chickens). On "OxyContin Blues," written by Joey Carper, Quinn digs deep into what was, until two weeks ago, one of the largest crises the country is facing.

If you're in Oregon, Kory's playing a couple of shows ahead of the album release: 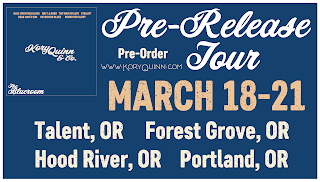 If you're not in Oregon, you can pre-order the album here.
Posted by Rachel Cholst at 1:11 PM