I am very excited to remind you all how excellent Hearth is in this week's episode of Adobe & Teardrops (hopefully up later today.) But! I also want to make sure you hear "The Angel." The melody is a true earworm and speaks to the duo's fantastic harmonies and New York grit.

Formed in 2016, Brooklyn-based indie folk duo Hearth consists of Melanie Wiggins and Sara Horton, who sing and play their quirky, soulful songs about everything from the vagaries of love in the time of frat-bros and nice-guys to inequality and immigration reform - all delivered with an Indigo Girls meets Simon & Garfunkel meets Kimya Dawson meets something-you-haven't-quite-heard-yet sound. 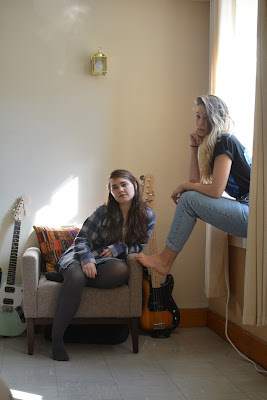 They've played shows all over NYC, from Bowery Electric to Rockwood Music Hall. Their debut single "January" was released on 1/24/2020 and their three-track self-titled EP is out today.

"I wrote the song very quickly, in one sitting, when reflecting on past relationships and noticing my own patterns," Wiggins recalls. "While writing this song I was inspired by the storytelling of traditional folk music and exploring different stages of relationships through 3 different characters - the gambler, the angel, and the lover. When Sara and I started working on the song it was a big 'wow' moment. Her vocals made the story truly come to life and everything just fell into place. It was one of the first songs we performed together."


You can listen to the EP on Spotify or Soundcloud and you can learn more about Hearth on their Instagram.
Posted by Rachel Cholst at 1:37 PM