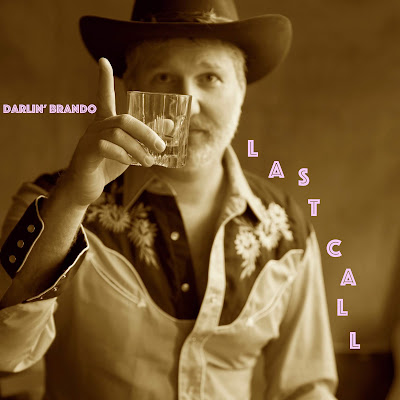 From Virginia to LA to Brooklyn to Nashville, Goldstein has been at the forefront of the local country and Western scenes, swinging along the spectrum of underground country with country-rock band Merle Jagger, folk-pop band Money and King and supporting neo-trad country artist Tommy Ash. Goldstein moved to Nashville recently for yet another re-invention, familiarizing himself with Nashville honky-tonks like American Legion Post 82 and The Nashville Palace behind the kit for Ash.

For his new album, Also Too…, Brando found that his songs came together if he focused on line-dancing and two-step. "I really enjoy two-stepping and wanted an album that people could two-step to and that would play well in any honky-tonk bar.”

On "Last Call," Brando transports us to one of those bars we already frequent -- or wish we did. The song has a rugged, lived-in feeling, like it's got layers of spilled beer and a couple of salty tears caked onto the floor. But like any good bar fly knows, those things add character.

Part of that character comes from A.J. Croce's rollicking piano track. “I met him through friends shortly after moving to Nashville,” he said. “I was over at his house one night for drinks and played him a demo of the song. I told him that I wanted to go for a rockin’ Charlie Rich meets Jerry Lee Lewis kind of sound and he offered to play piano on the track. I was honestly very surprised and flattered that he’d be down for something like that. So he came in on one of the two days we were tracking the band at The Bomb Shelter, requested an espresso and beer (at the same time), and pretty much learned the song on the spot.”

Darlin Brando's debut solo album, Also, Too... is out on June 15th.