If you enjoyed Audrey and Hugh's otherworldly harmonies on Episode 112 of Adobe & Teardrops, good news! There's a whole album of the duo's whimsical folk pop out on May 22nd! Sisterman, whose release was postponed due to our current preventable pandemic, derives its name from the connection between the two singers. The pair share a chemistry akin to blood harmony -- the phenomenon of people who have grown up singing together being perfectly attuned to each other. 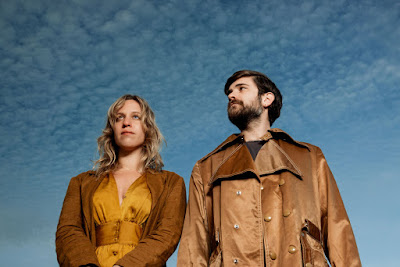 Here's what the duo has to say about "Young, Loved, and Free":

"'Young, Loved, and Free' is a song that has undergone quite a bit of change and growth. It was originally featured as the title track on Hugh’s 2014 solo album Another Ghost to Sleep. Since then it has evolved in more than its name. The song truly came into its own in the studio as we co-wrote and recorded our debut album Lily White Parade. Rewriting and arranging the song together perfectly captured the vitality and love that exists between us as friends and collaborators.

It is a song that celebrates connection and communication.The chorus is a call to action, to live one’s life unapologetically. We don’t feel the song is ageist, or simply addresses youth. We all arrive brand new to each coming moment. The fact that the future is uncertain means that life is really an endless parade of beginnings. Especially during these anxious, unprecedented times, we feel that this message of hope and opportunity is more important than ever. We hope 'Young Loved and Free' helps to remind you that you are not alone, and that by simply being yourself you contribute beauty and hope to the world."

Sisterman will be out on May 22nd.

Email ThisBlogThis!Share to TwitterShare to FacebookShare to Pinterest
Labels: Audrey and Hugh, premieres