Lots of touring musicians call themselves troubadours, but how many of them can say they've traveled to gigs by RV, van, bus, and foot (with hiking gear and instrument cases)? Amy Alvey and Mark Kilianski, now touring as Golden Shoals, have shared seven years four hometowns together: Asheville, Boston, and environs in California and New Jersey. 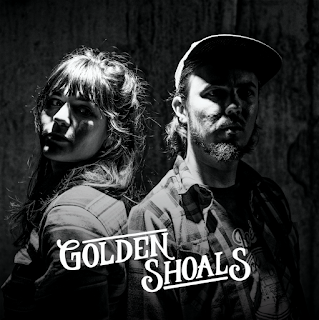 The duo's new self-titled album, out August 7th on Free Dirt Records, incorporates all those experiences. The album veers from the comic to the tragic, but "New Friend," premiering exclusively on Adobe & Teardrops, falls into the tragicomic.
"'New Friend' came from being the victim of 'friendcest' (finding out your ex is dating a close friend) a few too many times," the band told us. "Most of us at some point have been on the short end of that stick, and all would agree it’s an emotionally tough spot to be in. There’s a subtle, almost careful approach to the arrangement, much like navigating between taking the high road, and feeling so hurt that you want to let everyone know of their betrayal. It isn’t until the bridge that the specific nature of the heartbreak is revealed. Mark’s sparkling guitar fills and solo were largely inspired by a Cuban guitar trio named Carlos Puebla, Santiago Martinez, and Pedro Sosa."
Golden Shoals · 6. New Friend
Golden Shoals will be out on Free Dirt Records on August 7th, 2020.
Golden Shoals -- Official, Facebook, Instagram, Bandcamp, Spotify
Posted by Rachel Cholst at 10:32 AM