It's -- a review? Back on the old Monday, Wednesday, Friday schedule? Let's see what happens!

Speaking of blasts from the past, I last heard from Anthony Presti back in 2015 with his charming album Clarity in Hindsight. There are some other albums in between then and 2020's Different Places, but one thing is a constant: Presti's gentle form of country rock ("A Fire Inside") -- like if John Mayer met the Old 97s.

The album's opening track, "Waiting for Tomorrow" combines the SoCal pop punk of Presti's youth with laid-back, sleepy/weepy guitars of his folk and country present. Presti has a knack for hooks and strong melodies, but the playfulness of his guitar licks throughout the album are a real highlight like they are on "Heartstrings." He's not afraid to get a little weird with it: "Your Town" is a fun little jazzy number with a strident saxophone track. 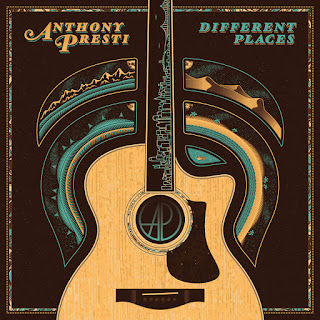 Like any good punk rocker, Presti has a political streak. "Fight the Good Fight" is not quite the strident political song you'd think it would be in an election year -- and that's fine. I have a relative who is, by choice, crashing with a friend because the renovations she paid extravagently for in the apartment her parents bought in the 1960s. In an e-mail today she referred to herself as "displaced person" while acknowledging her privilege. Meanwhile, I have students who are doubled up in shelters with no clear date as to when they can have access to permanent housing. And they're attending online classes.

I digress, though -- "Fight the Good Fight" is about resilience when things get tough, and that is a valuable reminder for comfortable people in any season.

On the other hand, "Fake News" works as a pop-punk number -- just the right amount of snide and disillusionment as we await the fate of the Twitter presidency.

For me, Different Places is strongest when it embraces more of a country sound, like the tragic "Wanted." The song forces all of us -- Presti, his band, his listeners -- to focus on the lyrics. In this case, they almost don't need the wailing guitar: just two voices filled with longing.