Have you hugged your butch today? Apparently it's International Lesbian Day -- I just learned that and now you have, too! Pop producers Drea Rose and Katie Hargrove have been planning on it, though. The pair's new song, "Talk," is an infectious number with rippling synths and a Disco downbeat. The song celebrates queer love, even as it dives into the aftermath of a lover's quarrel. (Long-term readers will remember Hargrove's country-soul "Be Your Baby" from my 2017 Labor Day playlist.) 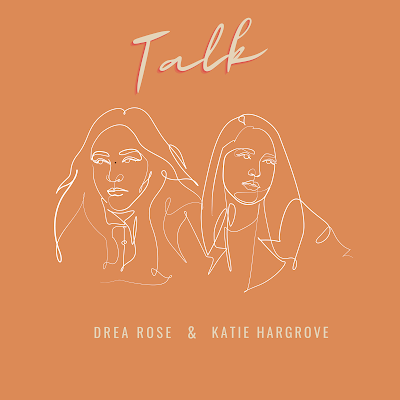 Here's what the pair have to say about the song:

"The song is called “Talk” and we are releasing it for National Lesbian Day (October 8th). Being as we both identify as lesbians, we thought it made sense to release a song about a relationship on a day that we both celebrate. “Talk” was the first song we wrote together and we thought it would be powerful, not only as two queer women singing about love, but also as it’s a song that was written, recorded and produced entirely by two women."

Drea Rose is the sonic declaration of California's laid back and eclectic culture. Los Angeles based artist/producer/songwriter accentuates her sweet and soulful sound from the likes of her roots in jazz, R&B and Motown. Drea has performed with artists such as Jeremy Passion, Melissa Polinar, Sam DeRosa, Gabe Bondoc and more. She has been recognized nationwide for her appearance on Season 17 of American Idol as well as winning the Audio Assemble contest, “Plugged in Online Festival”. As a street performer, she has caught the attention of industry moguls like Snoop Dog, Jordan Fisher, Scott Hoying, The Pentatonix and Sydney Sierota from Echosmith. Drea has been featured in publications like Earmilk, Voyage LA, Californian, The Word is Bond. Aside from producing and writing her own material, she also works with major artists like Tim Atlas and Jesse Barrera.

Katie Hargrove is a writer/artist hailing from Knoxville, Tennessee. Katie’s style is rooted in creating bold melodies influenced by R&B and left-of-center pop. She has performed alongside national acts such as Jason Lancaster of Mayday Parade & Go Radio, Kris Allen, Aaron Carter, Charlie Parr and others. Her self-titled debut EP was released in March 2017 and quickly charted in the Top 100 on iTunes. The album was nominated for “Best R&B Album” by A2iM in June 2018, alongside Sharon Jones & The Dap Kings, Mavis Staples, Kelela and Jamilla Woods. Katie’s nomination was also featured in Billboard’s June 2018 Pride Issue. She now resides in Los Angeles, CA where she has penned songs for artists such as RUNN, Flavia and Last Heroes as well as co-writing the opening and closing songs for Episode 5 from this season of Vida on Starz.